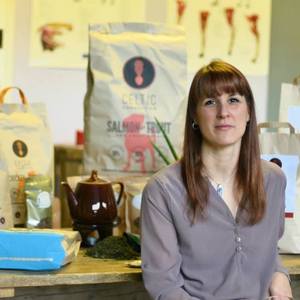 Which ingredient do you find most valuable in your pet food and what is its function in pet´s body?

The most important ingredient is MEAT! Dogs are 'functional omnivores' meaning they can SURVIVE on plant-based food, but if you look at their bones, their jaws, their teeth, their digestive tract... they were DESIGNED to eat meat! Meat contains all the essential amino acids that dogs need and is the most natural form for their body to digest them.

Why should dog food contain fruits, vegetables and herbs?

Fruits, vegetables and herbs should be secondary to meat in pet food, not primary! In the wild, wolves seekout berries, fruits, vegetables and herbs to meet vitamin and mineral deficiancies in their bodies. Mother Nature is very clever in providing us all with an innate ability to know what our bodies need and knowledge of food that we can use to can balance it. It's why we have cravings for certain foods! Fruits, vegetable and herbs also provide fibre which is important for keeping the intestinal flora healthy and to keep things 'moving along'. 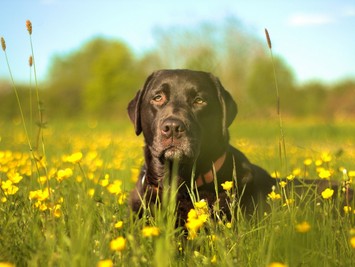 Some articles say nowadays, that gluten-free diet has no reason for dogs. Is gluten-free real benefit then?

While there has only been one (perhaps two) cases of dogs who are truly sensitive to gluten, the real issue is that gluten comes from unnatural food source for dogs such as wheat – when is the last time you saw your dog DROOLING while staring wide-eyed at a wheat field – and gluten, as the name implies, sticks like 'glue' to the villi in the small intestine and can block the absorption of nutrients. There is also a natural chemical in grain called phytic acid which blocks the absorption of magnesim and zinc – two minerals important for the muscles, energy conversion and immune system. So feeding a pet food that contains grain or gluten not only does not provide all the nutrition a dog needs, it also blocks some of the nutrition it does provide so the dogs looses out doubly.
One more note, it has been proven that gluten that does get into the bloodstream can pass through the blood-brain barrier and cause inflammation there as well. Ever notice how dogs that are fed a food that contains grain get very hyperactive after a meal – to the point of almost 'picking a fight' with another dog in the house? Not only does grain create an unhealthy sugar spike like white potatoes or rice can also do, that temporary inflammation in the brain could explain some of the behaviour and concentration issues we see in dogs.

What are the chondroitine, glucosamine and MSM functions in the body? Is it a proper way to feed them on daily base?

Glucosamine and chondroitin are two minerals that are found at the ends of bones in the articulating cartilage of joints. In nature, when a wolfs / dogs eat their prey, they eat some of the small bones which provides calcium and they chew on the ends of long bones where the articulating cartilage is found. In this way the animals ensure they get a consistent supply of these minerals for their own body.

MSM is a biologically active form of organic sulfur which is found in nature's 'sulfur cycle'. In the wild, this would be found in rainwater and in fruits and vegetables that absorb rainwater. MSM is broken down into sulfur containing amino acids such as methionine and cysteine – the two amino acids needed to form taurine which is important for a healthy heart and eyes. Sulfur is also needed by every cell in the body for cell membrane permeability – allowing nutrition and waste products into and out of the cells, respectively.

By including glucosamine, chondroitin and MSM in Celtic Connection, our recipes provide not only the minerals needed to support and help repair the joints, but also the sulfur that allows these to pass through the cell membrane and reach the area they are needed in for beter absorption. By feeding our recipes every day, the synergistic support they offer ensures the health of the joints is maintained for years.

Is there a specific group of dogs to which you would especially recommend your recipes?

There is not really a specific group of dogs that I would recommend Celtic Connection for since every dog deserve the best health and comfort that can be provided. Healthy pups to old senior dogs and everything in between are thriving on our recipes.

Fussy dogs also really love our recipes. We have one customer whose dog turned up her nose at most brands and changed her opinion about the one she finally chose to eat every few months. The cupboards were filled with half-full bags and the owner had a lot of money invested in pet food! It was a friend of the family so I convinced him to just try a small 2,5kg bag... just to see what his dog thought. The dog loved it, but his response was 'yeah, but she will probably change her mind in a few days.' Days passed and the dog was still enjoying it, so he bought a 5,5kg bag. A couple weeks passed, and she still enjoyed it! So he bought a 12kg bag, and she still loved it. A long story made short, it has now been five years on our recipes without a change and the dog still eats every meal with gusto! And the vet is amazed at her advanced age since she is in such good condition, including her joints!

However we have seen the best results with dogs that have known or suspected food sensitivities. While there was some thought given to this when the recipes were developed, I must admit the results have even exceeded my own expectations. Since 85 % of sensitive dogs are sensitive to beef, the decision was made not to include this in any of the recipes. 42% of sensitive dogs have an issue with chicken (some dogs are sensitive to both beef and chicken which is why the numbers add up to more than 100%). While many pet food producers will create a recipe that only contains meat from fish, they still add chicken fat – and this still causes a problem. So Celtic Connection recipes were developed to include only on protein type. That could mean poultry, fish or another protein group like caprinea which includes sheep and goats.

But I was not happy with only using one protein source like lamb, since lamb does not inlcude all the amino acids at the nutritional levels needed for optimal health. If a dog is fed a food that only includes lamb for a longer period of time, their body will recognise that it is not getting everything it needs and, like I mentioned above, will force the dog to seek out for a different protein source that provides the missing amino acids. Since we feed dogs from a bowl and do not allow them to search for there own food, we will see the body trying to show there is a problem by 'digestive distress' – vomiting or diahorrea, skin issues, or the dog just refusing to eat the food. We think the dog is being picky, but it may be that the food makes them feel physically ill!

So to ensure that ALL the amino acid requirements were met, at least two protein source from the same type are included in Celtic Connection recipes. For example, all the amino acids that lamb is deficient in, goat has plenty of, and vice versa. So by combining these two, which are both in the caprinae group, we created a hypoallergenic recipe that is complete and makes it possible to feed indefinitely! This has been a God-send for pet parents. Especially those who knew their fur-baby was sensitive to a certain protein, but could not understand why another single-source protein pet food was causing problems 'all of the sudden' and they were having to change pet food every few months – and the list of 'suspected' food sensitivities kept growing when it was actually an amino acid deficiency. Now they have a food that they can feed, their pet is comfortable and the search for something new every 2-3 months can stop!

Can you share with us a specific story, when Celtic Connection solved a health issue at a dog?

I think one of the best stories was about a very itchy Golden Retriever named Gribouille. The owner had tried everything that the vet advised, the breeder advised, friends had advised, but poor Gribouille continued to itch – to the point that he was licking off his fur damaging his skin. Finally a neighbour suggested CC and within a few weeks, not only did Gribouille stop itching, his fur began growing back AND he was much calmer around the house. He was clearly more comfortable and happier – and was his owner – and as was I! Look at some some before and after photos below as well as a photo of a very content Gribouille. 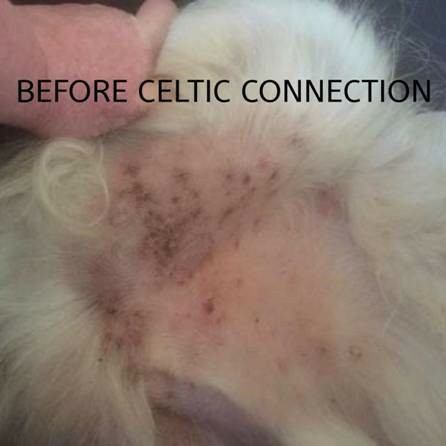 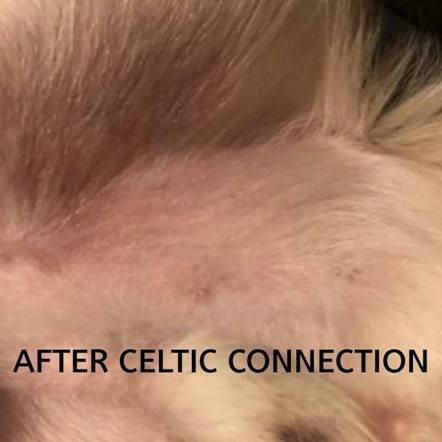 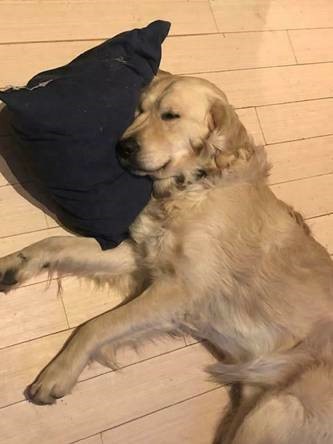 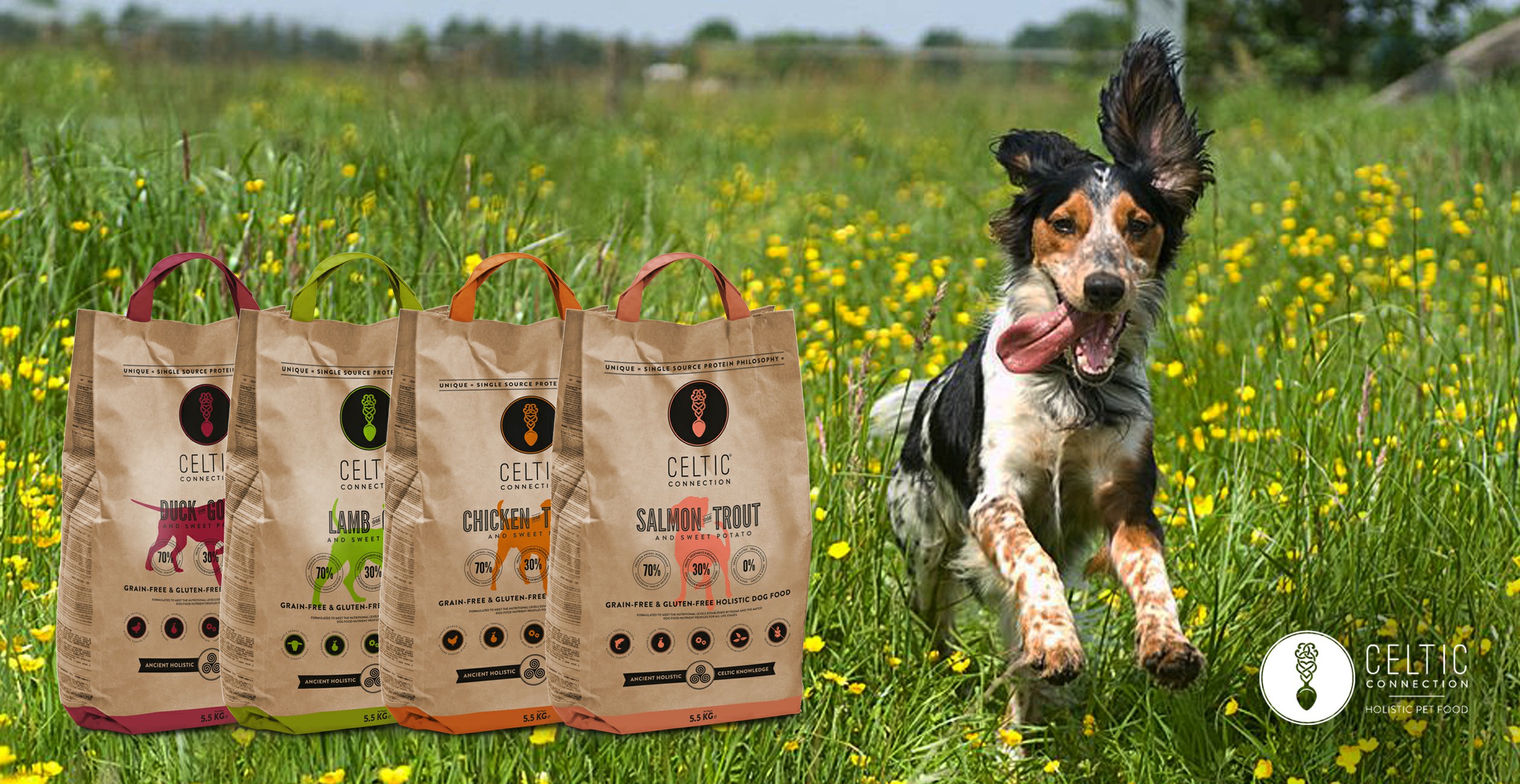